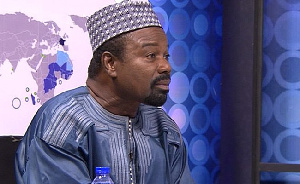 It is madness for anybody to support the secessionist movement in the Volta region, Dean, Academic Affairs at the Ghana Armed Forces Command and Staff College, Dr Vladimir Anwti Danso, has said.

He explained on the Key Point on TV3 Saturday October 10 that the premise on which the perpetrators of the insurgency are proceeding is flawed hence have no basis.

So far, a total of 60 persons have been arrested in connection with recent disturbances.

The disturbances were caused by suspected members of the Western Togoland secessionist group. Fifty-four of these suspects have been remanded in custody as government intensifies security operations in the Region to bring the insurgency under control.

Speaking on security-related issues on the progarmme with host Abena Tabi, Dr Antwi Danso said “This sense of insecurity is also fueled by total indiscipline in the country , non obeisance to constitutionalism. It is like the constitution people don’t know and they don’t care about it . Institutionalism is also lost.

“It is because of this that some prominent people in Ghana are supporting a secessionist move which to me is insane to start with.

“It is also because the truth has not been told about the Western Togoland issue . People thought they were added to Ghana , that is a lie. There was no Ghana , it is that part of the world and Gold Coast that came together before they called it Ghana.

“So that territorial integrity of Ghana must be protected at all cost. No other person has any right, as an individual you may leave Ghana but the territory of Ghana is Ghana’s.

“Those places where the activities took place were part of Gold Coast already. Again, the biggest lie is that Resolution 10 (44) said that at a point in time you can go. The uninitiated in the rudiments of international laws will tell you this is false.

“You cannot be . That is not how treaties are written. The UN could not have created a country and then stated in that resolution that part of that could go . So all these things are lies.

“Terrorists or people who want to act against laws usually find the most optimal situation . Elections are getting close, why don’t I rise because the insecurity of the country would have been generated by the election fever already so they timed it and they have been planning towards it.”

Send your news stories to

Nigerians react to death sentence for kidnappers of Takoradi girls

NDC to petition Supreme Court over election results on Wednesday

I Have Not Been Lucky With Friends-Moesha Buduong Recounts How Some...

September 22, 2020
Load more
© All trademarks and copyrights on this page are owned by their respective owners.